How To Secure Parking Lots in A Commercial Building

Commercial buildings usually have parking facilities for the individuals working in them. To give them peace of mind, the relevant steps often need to be taken to ensure that the vehicles will be safe. Reducing the risk of theft or vandalism requires one to think about some of the potential ways in which the above can be done, and then putting in place measures to curb them. Typically, this does not need to cost as much as most people think it will. There are several critical aspects of ensuring that a parking lot in a commercial building is safe. These include:
Limited access 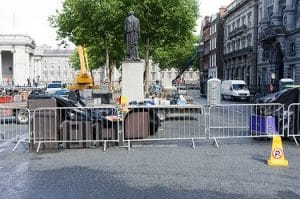 Limiting parking access to only the people who work in the building is one way of enhancing safety, as well as ensuring that the parking will be enough for all the employees. Limiting access to the parking lot can be done in a number of ways, the most common of which is giving staff members stickers that they put on their car windshields to show that they have the right to park there. If the company provides name tags, these can also be used in the same manner as well. Limiting access to a parking lot in a commercial building will ensure that parties intending to vandalize or steal the vehicles will have a much lower chance of doing so. In most cases, you will need a security guard to enforce this policy.
Regular patrols
Though they might seem to be a waste of time, patrols by security guards are actually very good methods of enforcing security in a commercial building and its parking lot. However, such patrols should not involve just walking around. They should be done with the objective of making sure that all the parked cars are not tampered with.
Patrols can also be used to identify individuals who have the potential to steal or vandalize cars, and then stop them before they do so. As you can see, such a patrol is a focused one and has clear objectives that need to be fulfilled. You will need to get such security patrol services in Montreal from companies that have a good reputation, and which invest in training their security guards to the highest levels.
Car movement control
An important element of securing parking lots in a commercial building involves controlling the movement of cars into and out of the parking lot. This provides an opportunity for one to identify the driver, and ascertain that they are the actual owners of the vehicle, rather than someone who simply stole the car. Some of the control measures that are common in these settings include bollards and automated gates, which allow cars to pass one by one. This is particularly important if other checks have to be done depending on the company’s policies.
Limiting the entry and exit points
During parking lot design, one should limit the number of entry and exit points if they are to keep it safe. This way, any car that is driven out of the parking lot will be forced to use a particular exit, which in turn makes it easier for any security guard to check for any suspicious activity in case the car is stolen.
Limiting the entry and exit points from the parking lot should be done while keeping in mind the fact that it can lead to traffic congestion. To avoid this, the entry and exit points should be designed with the expected traffic volume in mind. For instance, in the case of a very large parking lot with many cars, it would be wise to install more than one manned entry and exit point, so as to ensure that more cars can move in and out of the parking lot in a given time.

More Posts You May Find Interesting